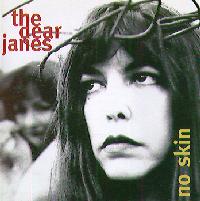 The Dear Janes: No Skin -- by George Graham

Sometimes the most interesting music comes out of unlikely circumstances and combinations of personalities. This week's album is a good example. It's the American debut by a duo called the Dear Janes, a CD entitled No Skin, and it's one of those records that does not conveniently fit into any ready category.

The Dear Janes are Ginny Clee and Barbara Marsh. Ms. Clee is British and Ms. Marsh is American. Both are the daughters of peripatetic military men, and thus grew up in a variety of places. Clee sang with her family; Marsh's father had a guitar which she picked up after first starting on the ukulele while her Navy-man father was stationed in Hawaii. Both Marsh and Clee eventually took up music more intensely as time went on. They were introduced to each other by a mutual friend in 1992 in London. Though both had performed separately previously, at the end of 1991, Ms. Clee had become tired of the music scene and was looking for something new. Though she drawn to Ms. Marsh's lyrics at a performance, her agreement to collaborate was driven as much by a need to try something new as anything else.

The duo's record company biography quotes them as saying that thought their musical compatibility was quickly evident but, as Clee says, "It was a battle. It’s still a battle. That competitive element is always there and that’s what makes it work. We can’t do without each other, but we did sit on the sofa and fight for the first three months." Nevertheless, they have made it work, and in 1994 released an independent album called Sometimes I, recorded in Ms. Clee's basement. While they mainly work as a duo, No Skin was recorded with an eclectic small backing band, aided by producer Richard Evans, who has worked in the studio with Peter Gabriel, among others.

What they came up with is a one of those pleasantly uncategorizable hybrids. Both Clee and Marsh are dusky-voiced altos in the English folk tradition of Sandy Denny or June Tabor. They can also resemble Marianne Faithfull at times. They do draw on folk styles, but their respective geographical origins make it sound like neither American or English folk. Nor do they particularly hew strongly to the folk sound in general, what with the odd collection of influences that come together on the CD, including everything from very electric guitars to bassoon and accordions. The Dear Janes' songs tend to be dark and ruminating, but they can add odd romantic touches to their sound, along with almost theatrical moments. The result is an album that is fascinating and sometimes compelling in sound, while at the same time melodic and usually very appealing on its surface. Lyrically, they are quite poetically oblique in their treatment of personal relationships, which provide the subject matter for most of the songs. And oftentimes, those romantic relationships are in some kind of trouble. The wordcraft and use of metaphor is another strength of the Dear Janes.

Joining Clee and Marsh on this album, which was recorded in Peter Gabriel's Real World Studio, is bassist John Gilbin, percussionist Pablo Cook and a keyboardist who goes by the name Speedwell. Producer Evans adds some mandola, a kind of larger-sized mandolin, and a little Dobro on one track. The Dear Janes recorded much of the album in live in the studio, without a lot of the usual multi-track technique of layering instruments one at a time. The arrangements are quite distinctive, ranging from dark sampled percussion reminiscent of some alternative rock or Suzanne Vega's recent work, to very folky acoustic instruments, to something that sounds as if it might have come from an old 78 record from the 1930s.

The album begins with one of its more fascinating pieces, Get Off the Cross, marked by an electric arrangement. The opaque lyrics are subject to any of a number of interpretations. <<>>

Both folkier and rockier in sound is the following track Angry, in which the anger discussed is praised as an asset. <<>>

Among the more unusual pieces is Totem Pole, which is given an odd, old-fashioned sound with its accordions and bassoon. The result is fascinating and good example of the originality of the duo. <<>>

With a similar sound, and also dark and ponderous in its lyrical mood is Dead Woman's Jewels. <<>>

Grace My Table is one of the album's most appealing songs, the closest thing to pop on this musically iconoclastic album. This melodic love song has the kind of new folk-rock sound that is turning up a great deal these days, though the Dear Janes add their own distinctive approach. <<>>

The album's most poignant composition is Orphan, which contains the line "no skin" from which the album's title came. It's about the dying of the one's mother. <<>>

That is immediately followed by the musically jarring 10 mg Girl, about drug addiction. It's interesting to hear the Dear Janes' tight folky vocal harmonies in the context of the intentionally cacophonous arrangement. <<>>

The album ends with another of its ruminating, contemplative songs, Dangerous Dangerous Nuts, that again shows the Dear Janes' distinctive style with the contrast between their attractive vocal harmonies and the bittersweet writing. <<>>

No Skin, the US debut album by the British based, half American duo called the Dear Janes, is one of those records that tends to confound a reviewer's attempts to compare it to anything. If pressed, I would say imagine the Boston folk duo The Story singing down an octave, with an equally dense, ambiguous lyrical style. The fascinating arrangements on No Skin further add to the record's appeal, with stylistic boundaries being crossed with abandon, and arrangements ranging in influence from Celtic to Marlena Detrich to Suzanne Vega to Peter, Paul & Mary to Tom Waits. The result makes for fascinating, evocative listening that is nevertheless potentially wide in its appeal. If given any exposure, the record could draw fans from different generations, and those whose tastes run from alternative rock to Fairport Convention.

Sonically, the album is well done. The studio effects are judiciously handled, and sound quality and clarity are commendable. The dynamic range is also better than average for a major label pop release.

Ginny Clee and Barbara Marsh, collaborating as the Dear Janes, have created a very impressive and memorable album that is more easily listened to than described.

This is George Graham.

(c) Copyright 1997 George D. Graham
This review may not be copied to another Web site without written permission.

Back to Index of Album Reviews | To George Graham's Home Page.